This spring I was invited to co-captain a Men’s 3.5 USTA team based out of my home club, Manhattan Plaza Racquet Club. I had just gotten back a few weeks earlier from Bollettieri’s IMG Tennis Academy so I was seriously “fired up!” (as IMG coach Roger Blackburn is prone to yell) and I immediately said yes. Excitedly, I emailed a group of 4.0 and 4.5 friends I really respect — all seasoned USTA team veterans– to ask for advice. Within seconds I got an email from one of them saying:

“My advice to you is DON’T CAPTAIN! It’s a thankless job full of time-sucking organizing tasks and it won’t help you with your goal to be a better player.”

Fortunately, my terror subsided a few minutes later when some other guys chimed in and basically said, “Disregard what he said! It can be a great experience if you have a good group of guys and the right mindset.”

I don't post too often due to my demanding day job, but I'll be happy to send you a note when there's something new if you sign up below. Find me on Instagram at @roadto45tennis.
They couldn’t have been more right. Yes, captaining was a lot of work. But it was incredibly rewarding on so many levels. And while we didn’t win enough matches to move on to Divisionals, we did finish the season with a group of (I think!) happy players who felt they had improved a ton, had a great time doing it, and were looking forward to next season. From my perspective, that was “mission accomplished.” But starting the season, I had no idea if others would have shared my definition of “success.”

I had entered the season with what I feared might be an overly idealistic mindset that risked getting crushed: My goal was to build a team focused on player development, not winning per se— a vision that my terrific co-captain, Zach Goldman, shared. I imagined a group of guys coming together regularly to train with each other under the supervision of coaches who would push us to improve both technically and strategically. Having been deeply influenced by sports psychologist Jeff Greenwald, I wanted to create a culture where team members entered matches with a goal of playing their best, not “winning”– free to test drive what they’d been working on in practice, and liberated from the stress of “letting the team down” if they lost. Most importantly, I wanted everyone to have a fun and rewarding experience.

We drafted and circulated a MISSION STATEMENT to the players we were recruiting, which proved incredibly valuable in setting the tone from the start:

Our team’s mission is help passionate tennis players in NY to achieve peak performance in competition and to take their game to the next level. Winning is great—but our primary objective is to foster effective player development and a rewarding team experience.

We also outlined a set of TEAM VALUES AND EXPECTATIONS that helped get everyone on the same page and went a long way in fostering the culture we wanted to build: 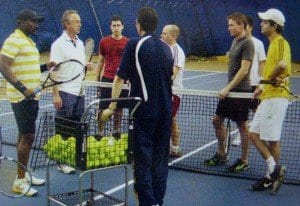 In addition, I think it made a big difference that Zach and I did everything we could to keep things incredibly organized and avoid situations where endless strings of all-group emails were cluttering team members’ in-boxes. We surveyed everyone’s availability for matches at the start of the season using Meeting Wizard so we only had to ask once and could view a “dashboard” of availability at any time. We also set up a password-protected team website (using the free PBWorks wiki site) that included the match schedule, contact information, upcoming practice dates, and the lineup as soon as we had it for upcoming matches. Not every team member used the site a lot, but those who did loved it– and for Zach and me it was a godsend to keep track of tons of information. To track RSVPs for practices, we used Evite– which also cut down on unnecessary emails flying around. Importantly, I think all of this organizational effort sent a signal to every team member that we truly valued and respected their time and contributions– which may help explain why our teammates were so consistently responsive and gave so much back over the course of the season.

We also tried something pretty unorthodox for practices: we used a “pay what you can” approach, giving players a suggested range for contributions to offset court and pro fees. We didn’t want anyone to have to miss a practice for financial reasons, which given the cost of living in NYC is no small matter. My co-captain and I knew we were risking taking a bit hit financially for that, but it turned out that most players contributed enough to offset most of the costs. We’re really glad we took the risk.

Finally, we were helped in a big way at the start of the season by reading the advice from fellow captains on “Player to Player: Captaining a League Team” as well as the great summary prepared by our regional USTA coordinator, Deb-Rose Andrews, of the top lessons learned/advice she received from veteran captains in our region. Below is an edited version – and I’ve bolded the things I personally think are most important.

Assign specific responsibilities to your co-captain.   Communicate regularly and divide the work and handling of matches.  If you don’t have a co-captain, consider recruiting someone to help with the team to:

"Good things happen to players who bend their knees" →

END_OF_DOCUMENT_TOKEN_TO_BE_REPLACED

So true, everything in this post. I did my maiden season as USTA team captain in Men’s 4.0 in Fall 2014 and led my team to the city playoffs, though we couldn’t make the championship game. I used the messaging app called whatsapp to coordinate practice and send updates to team, had setup a ‘group’ for the team in same. We also had a google group for email communication and used it for sharing match lineup and match results (though the whatsapp group was used interchangeably sometimes). Also used Google drive to share videos or any documents. Used a excel… Read more »

Great stuff, thanks for sharing! PJ

Was inspired to put down my experience in the blog post below,
https://tenezious.wordpress.com/2016/01/19/learning-the-ropes-of-captaining-a-usta-league-team/
-VJ

Thanks for the nice blog, very useful. Keep sharing such ideas in the future as well. I am glad to come here!

I had played USTA leagues before, and enjoyed a lot: team mates and captains were really committed, everything worked good. but hey, this season with Goldman-Simmons team was wonderful. Besides, playing in sunny California is easier than doing it in NYC… so I have to give all the credit in the world to PJ and Zach for their amazing job. They made us feel like a family, and didn’t let any loose end on the organization of practices and matches. Yes, we didn’t make it to the Divisionals… but I’m pretty sure next year we’ll be there!!!!

I had the pleasure of co-captaining the above mentioned team with PJ. I want to echo all of PJ’s comments above, but in particular encourage those of you who are considering becoming a team captain to take the plunge! It is incredibly rewarding, and is a great way to meet some great people and develop new relationships.

I have worked with this team 2x and was amazed by the respect and trust this team had in their leader. They were focused, hungry to learn and very supportive of each other. It was so enjoyable and refreshing to be around. And now, after reading this entry, I know why. I will definitely share this entry to all of my tennis friends and colleagues that lead and/or are part of a league/team.