As I mentioned in a recent post, I’m on a mission to transform my serve from a weakness to a weapon. It’s a process that’s involving a lot of patience: I’m breaking down every aspect of the serve and, in the process, trying to break some deeply ingrained habits.

Last week while out in Denver I had a great private lesson with the awesome Jeff Salzenstein, a former top 100 ATP player and Level 1 USPTA-certified pro whose internet-based instructional videos are outstanding.

Jeff shared a simple philosophy that I think is dead-on:

If your body learns the correct start and end position for every stroke, it will figure out everything in between more naturally

For serve, it all starts with getting the “trophy position” right — that position made famous in the ATP logo.

You can see what my trophy pose looked like before my lesson in this video shot a week prior:

As always, video helped me see the truth, as I thought my body was doing something very different.

1) Straight arm/ failure to bend the elbow, creating tightness in the shoulder and impeding proper racquet drop and acceleration

3) Chest is too “square to the fence” (perpendicular to net), which also detracts from potential power

Contrast this with what a model trophy pose should look like (Jeff Salzenstein’s) – the image taken from one of Jeff’s incredibly helpful instructional videos I got access to after subscribing to his “Tennis Serve Secrets Program.” 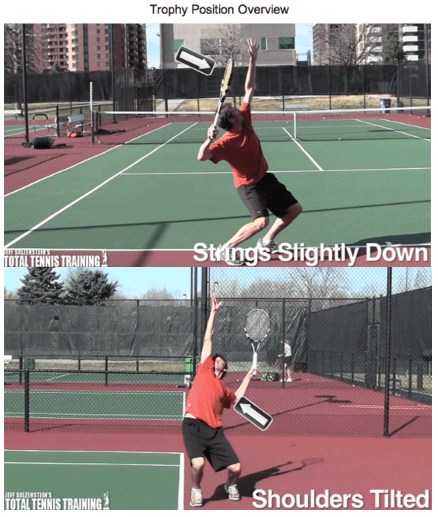 In our private lesson, Jeff spotted this in about 3 seconds and manually adjusted me until I felt the right position. Here’s a clip of me trying to find the right pose immediately afterwards, with Jeff making some fine-tuning adjustments:

I’ve been practicing hitting this pose every day and it’s starting to become more natural: when I get it right, my serve has so much more pop with so much less effort.

Finally – here’s a collage of photos I’ve taken of top players at the US Open and Wimbledon that I look at every day for inspiration. 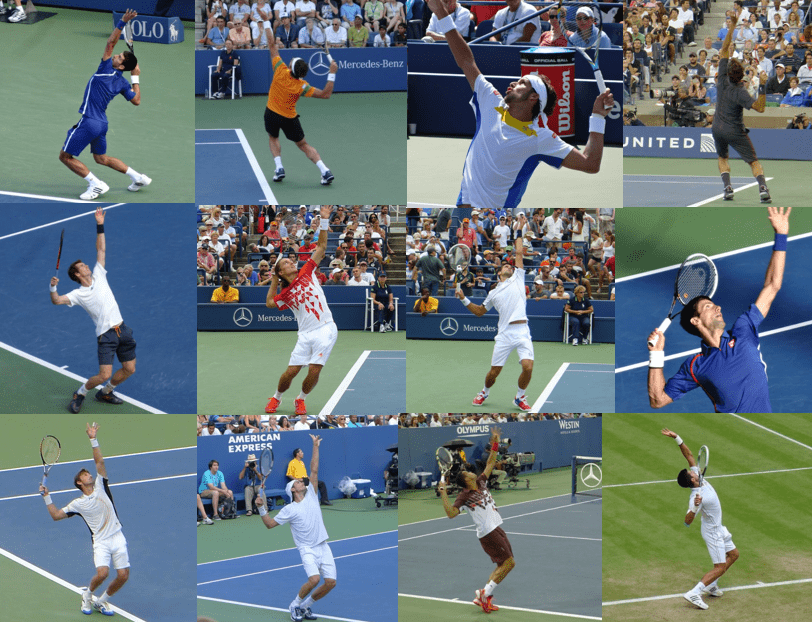 * Photo credits: I took all photos, including cover photo of Novak Djokovic, at the US Open and Wimbledon 2011-2012.

END_OF_DOCUMENT_TOKEN_TO_BE_REPLACED

“If your body learns the correct start and end position for every stroke, it will figure out everything in between more naturally”. This is an old argument in tennis and other sports, which is basically another way of saying that there is a set of reference points that you can meet, you the stroke will fall into place. Using reference points is the most simplistic way to teach movement in sport, and perhaps it’s good to know that there are much more dynamic methods that uses models of movement that you may find more effective. Reference points are simply too… Read more »

Wow, I’m amazed at how microscopic the adjustments are that Jeff makes in that video…looks like it’s a matter of degrees and inches. Who knew… very useful.

And most.of those microscopic adjustments are probably going to make things more difficult to learn. Teach the macro and the micro works itself out.
I had a 49 year old. Beginner student who learned a very advanced top spin serve in about 6 months by learning from a macro perspective.. I also have an advanced 19 year old who was taught too much detail and still has not mastered the same serve after 5 years of trying.

[…] didn’t fully embrace this reality until a couple years ago, when I set out to focus on improving my serve. Since then, I’ve learned that I’m just going to keep hitting walls with my serve until […]

I am 3.5 trying to get to 5.0 one day. I put 2 hours a day, 5 days a week and take weekly lessons from a tennis pro. Funny I have the same exact issue you showed in your video re the serve. Elbow too high in the trophy position. When trying to do it without the ball everything is near perfect. As soon as I need to toss the ball and find my timing, my right elbow starts climbing up which abbreviates the serve motion, and makes it powerless and inconsistent. I even tried to start tossing the ball… Read more »

Peder
Reply to  Doron Or

Doron, i think your comments are on the right track vis a vis the shadow swing. I’d say, do not try to copy the pro trophy position, quite the opposite. Figure out how to generate lots power with almost no body movement first. Don’t bend your legs. Don’t lean back. Don’t find reference points. Don’t do any of this, it’s a distraction from the real task, which is the act of striking. Using simply “cylinder drills” that takes the body out, this is how much serious serving coaches start out AFAIK, or try to fix core problems. The trophy position… Read more »

My 2014 Tennis (and Life) Resolutions

[…] leap forward on my serve. If you’ve been following this blog you’ll know that I set the goal to transform my serve from weakness to weapon over a year ago — but I’m still not there. I’ve purchased online serve courses from Florian Meier […]

I launched my blog!

It is not all there yet. I am still playing around with it. But I put up my first post anyway. I figure I will make it look nicer as I go along. From watching your video I think we have a lot in common.

Arturo, can’t wait to see it. Please send the URL whenever you’re ready to share and I can post it on the Roadto45 Facebook page (www.facebook.com/roadto45). Also, please consider doing a guest post on this blog – I have another player in the community who will be doing one this weekend on lessons from his journey with some video and photos. Would be great to have you share some of yours too! P.J.

I am very sympathetic to the slow building. I am still working out the kinks on the blog page. I suspect it will be a few more days while I work out getting myself familiar with wordpress. I hope to have something up soon and send you a note when it is in a functioning state.

Relaxation is so hard to do before the serve. It is amazing to see how well high level players are able to do this.

No rush Arturo, look forward to seeing the site once you get it up and running! P.J.

The “slow building” approach with such micro adjustment to the trophy position, which is by no means a required fundamental, is a long hard and potentially fruitless approach to learning how to strike an object with easy power and control. Better, perhaps, is to understand what a leveraged hit feels like by grabbing a hammer, and driving some nails into a piece of wood, then replicate this feeling with your racquet. What is a leveraged hit exactly? Look at the relationship between your hand, arm, and the the hammer’s handle. Watch some pro baseball or cricket or soccer. Spend some… Read more »

Hi P.J., Tomaz Mencinger from feeltennis suggested I take a look at your site. I can definitely sympathize. My serve has become such an odyssey that I decided to create my own site to discuss what I learned in more detail. I served for a while from the trophy with no windup. It is a little strange but it helps to eliminate anything that might be leading one down the wrong path in the windup. I am just curious how hard it has been for you to get to the trophy position. I remember struggling with this a lot and… Read more »

Hey Arturo, Absolutely still a work in progress for me– and I think you’re right that when trying to desconstruct the service motion it’s helpful to start from a correct trophy position with no wind up until that trophy pose become completely innate and “memorized” by the body: otherwise, old habits easily creep back in. In fact, I’ve found progression exercises generally to been super helpful (e.g., start simply by striking the pose over and over and filming to be sure I’m hitting it; then try striking it with a ball toss (but not a full swing) and filming to… Read more »

PJ – I am so impressed with your dedication! And it’s incredible how helpful video is as a teaching tool. It’s funny how it can FEEL like you’re doing one thing, but then you watch and see you’re doing something completely different:)