Serving in the Sandbox 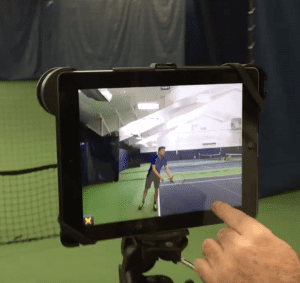 “The sandbox is a wonderful place
To pass the time of day;
Where imagination is limited only
By the child who loves to play.”
–From “Sandbox“, Author unknown

Anyone who’s been along with me on the “Road” knows that my serve has been a major preoccupation and source of angst. Since embarking on a “Project Serve” in fall 2012, I’ve made progress – but it’s been slow and unsteady.

When I started training at CourtSense in November, I told the coaching team tackling my serve was my top priority. I explained my frustration in knowing in my head what I should be doing while not being able to get my body to cooperate.

They brought out the big guns to help: CourtSense Director of Coaches Carlos Cano and founder Gordon Uehling. Here were the big epiphanies from a recent session:

(1) In an effort to help me get a looser arm, Gordon asked: “Imagine you wanted throw your racquet as far as you possibly could… How tight would you hold it… how would you feel while throwing it?” I laughed and said: “Loose. Really loose. Yeah, I get it!” Somehow the cue to visualize and imagine how I would feel– instead of just telling my body to relax and get looser– really got my brain/body to respond. I picked up 8-10 mph on several subsequent serves according to Playsight.

(2) Carlos quickly discovered that the timing of my racquet take back and initial weight transfer was off by a fraction of a second, which was inhibiting a natural, efficient transfer of energy through the kinetic chain. “You’ve done a pretty good job with all the elements,” he said, “now we need to fix the timing.” I made the adjustment and hit an effortless 90 MPH serve. Here’s a video of him explaining what looked right after the adjustment:

(3) After the above– which gave me a huge boost of confidence that I’m making progress and at least on the right track– Carlos said something like: “OK, now it’s time for you to play with it. Stop worrying about perfection and results… Do more observing and less judging. In other words, get into the “sandbox” and play.” He actually said all this in a really poignant way and it made such an impression I asked if he’d repeat it on film so I could share it with you. Here’s the wise Carlos Cano on why we should all spend more time in the sandbox, whether during practices or matches.

← When Your Coach Believes in You Want more topspin? Think "hello/goodbye" →

END_OF_DOCUMENT_TOKEN_TO_BE_REPLACED

Hi. My e tickets say enter at gate 26. Is that the east or south gate.
Thanks

Hi Taryn, that’s just for the stadium itself. You can enter the grounds using the East or South gate, whichever you prefer. In most cases East gate is more convenient (right across bridge from subway 7 train, and very short walk from LIRR train exit).

Very nice post! I really liked what Carlos said about relaxing your wrist until you reach the racket drop position. I am going to try that out. Thanks.

what app did you use for recording?

“For me, deciding I wanted to feel the joy of just playing tennis as if I were a kid shooting baskets in my back yard, freed me up.”

-Amen to that. Funny, as a kid I just like to hit the ball, didn’t worry about winning. Now in past years as I’ve tried to get better, my worry level actually got much higher. Back to the sandbox!

Life is a game and you get to make the rules that you want to play by. For me, deciding I wanted to feel the joy of just playing tennis as if I were a kid shooting baskets in my back yard, freed me up. I stopped following the universal rules of competition: who is the first one to 6 games and 2 sets, rankings, titles, who is better and who is worse. I played by my rules: being relaxed, having a good time, dancing to my own drum. And tennis became a game of effortless effort. Amazingly, good results… Read more »