If you’re serious about improving your tennis game, you already know that tennis inevitably comes with tons of frustrations, heartaches, and injuries. We tennis players have to constantly persevere through peaks and valleys in performance (“I thought I had a great second serve and now it’s disappeared!”), pick ourselves up after excruciating losses (“How could I choke so badly under pressure and slam that match-point overhead right into the net?!”) and cope with the emotional and physical pain of injuries (“Seriously?? Another injury?! I can’t take time off at this critical time!”). It’s enough to cause a lot of players to have a bipolar love/hate relationship with the sport—as Andre Agassi confessed in Open and as NPR “All Things Considered” host Amy Eddings hilarious chronicles in her I Hate Tennis blog (which includes a great “Meltdown of the Week” section).

For me, the “mental game” is one of the most challenging aspects of tennis. Things can go superbly well for me in practices—then supremely wrong when I’m in a USTA match (relatively new for me) or in front of a new coach or players I worry about impressing. My performance has varied by 50% or more in such situations.

But slowly but surely, it’s getting better thanks to:

I plan to post in the months/years ahead on individual tools and pieces of advice that are working well (or not) for me on the court. But I wanted to start with the one that to date has been most transformational by far: the concept of “Gratitude.” Let me explain.

A few months ago, I was heading into my 3rd USTA Men’s doubles match of the season. I had lost the first two doubles matches, and before that had lost three mixed doubles matches in a row. Inside, I was terrified about having a humiliating 6th defeat in a row. And as co-captain of my team, I was afraid of letting my great teammates down. Everything I’d been reading told me to put aside the goal of “winning” and replace it with a goal of “playing well”—which sounds great on paper, but in practice can be very tough to do when you feel the stakes are high for whatever reason. The magic words I needed to hear the day before the match came from my personal trainer, Jay Gallegos. He had asked when my next match was during our session and I told him it was the next day and how worried I was about losing yet again. In his plain-speaking, matter-of-fact way Jay said something like:

“Dude, you just need to be grateful. Look at you: you’re playing high-quality tennis, you’re in great shape, you have a great life and career… Be grateful, man– no matter what happens.”

It was exactly the kick in the pants that I needed. The words put things right back into perspective for me. I went home that night and re-read a few chapters from a piece by Jeff Greenwald (awesome tennis player and psychologist) and all of a sudden the words I had read month earlier hit me like a ton of bricks:

“Play with a renewed sense of gratitude and joy of the journey of hitting and playing the way you know you can deep down. We’re very lucky to be playing this game and remember it is just a game.”

I went to the match the next night more pumped up than nervous. My partner and I lost the first set 4-6 and it was my turn to serve the first game of the second set. As my heart starting beating faster, I could have thought “Here we go again…” But instead, I visualized Jay next to me repeating his wise “Be grateful, man” advice and my heart slowed. It started a chain reaction of positive thinking. I remembered some other words on a very helpful pre-match audio recording of Jeff Greenwald’s: “You are happy to be where you are right now. This is where you want to be.” I thought: “I am seriously grateful to be able to have reached a level where I’m even competing… I’m so grateful I play as well as I do right now… And I’m so fortunate to be physically healthy and able to do what I do on the court… I’m so grateful for my great life in NYC, for my amazing relationship…” Then suddenly the image popped in my head of our relatively new puppy, Mila—something to be very grateful for. 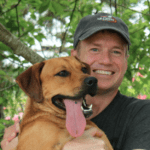 That thought put a huge smile on my face, and I felt a wave of calm rush over me. I had regained some perspective. I took a deep breath and hit several strong serves, winning that game. And I held onto the attitude the rest of the match, which we went on to win. I admit it, winning felt great. But what felt most great was knowing I was starting to beat back the mental demons and that I had played pretty well.

Since then I’ve been experimenting with other tools too, which I’ll share in future posts—breathing techniques, visualizations, and other trigger words and concepts. They’re all helping, but the most powerful tool of all for me remains recalling the words “I’m grateful” at key moments—and reminding myself why. On a recent weekend at Total Tennis, I was unexpectedly thrust into a group way above my level (4.5s) because they were short a fourth and one of the coaches thought it would be good to push me. I stepped onto the court incredibly tight, with self-reinforcing negative thoughts circling around in my head (“You don’t belong here…” “What are they going to think of you…” “You’re going to hold them back…”). 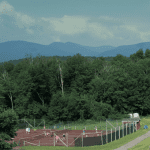 All of a sudden a loud bird grabbed my attention and I looked up. I realized that in my self-absorbed head I had completely forgotten my good fortune: here I was, standing outside in a spectacular setting on a gorgeous day with rolling mountains in the distance and trees gently rustling overhead in the breeze. On a tennis court—pretty much my favorite place to be. Playing tennis with a group of guys that a year ago I could have only dreamed of standing on the court with. I snapped out of the negativity and started to breathe again. And swing more loosely. And find my rhythm. I kept up and had a blast.

Tonight this idea of gratitude is helping with a new and unexpected speed bump on my “Road to 4.5”. Last night I was thrown off a horse at a full cantor in the woods (I’m on vacation in New Hampshire with my dad celebrating a big birthday) and banged up my right shoulder and groin pretty badly. I grew up with horses and have never fallen once, but we had gone out about 30 minutes after a big storm and it was really muddy and the horse tripped and almost fell over, knocking me forward over the saddle onto his neck. Holding on for dear life my first thought (after “don’t fall in front of the horse and die”) was, “I CAN’T GET INJURED NOW, I need to be at TENNIS CAMP in a few days!” I flew off the horse (fortunately to the right) and landed with a big thud that hurt like hell. I could barely move my very swollen shoulder all night. But the fact that I had already starting writing this post really helped put things in perspective: it could have been so much worse—no broken bones, nothing dislocated, my head is fine, and I’m alive. I’ll be back on the courts soon.

← How to Cure Tennis Elbow (and Golfer's Elbow) in 5 Minutes a Day To Grunt or Not to Grunt: An Amateur Tennis Player's Dilemma → 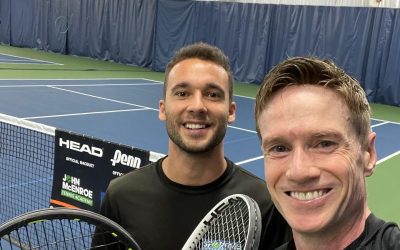 END_OF_DOCUMENT_TOKEN_TO_BE_REPLACED

Good post. I learn something new and challenging on websites
I stumbleupon on a daily basis. It’s always helpful to read articles from
other writers and practice something from their sites.

Remain in the light PJ. It’s where we work best.

When one shares the true nature of existence then we can truly say we live a life of gratitude.

In every Journey there is JOY. With each breath life graces us with a reminder of the greatnesses one can share. Accept the freedom in fun and live life in youth no matter what the sands of time express.

0
Reply
wpDiscuz
4
0
Would love your thoughts, please comment.x
()
x
| Reply
We use cookies to ensure that we give you the best experience on our website. If you continue to use this site we will assume that you are happy with it.Ok